Street Children in Morocco: No space or time for childhood 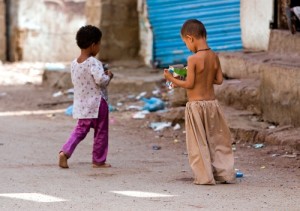 Thousands of children are left on the streets to deal with their sorrows and harsh living conditions. Shattered dreams, abuse of all kinds and lack of affection are the only reality they know. Morocco’s Secretariat of State for Family, Solidarity and Social Action estimates there are between 10,000 and 30,000 street children with more than 7000 in Casablanca alone.

These figures unreliable, however, because homeless children do not stay in one place. They move between neighborhoods and cities in search of another temporary refuge. They are often fleeing dire poverty where six or ten family members are crammed into a single room. Morocco World News highlights the important factors that lead these children to the street.

On the busy streets of Casablanca, we met 15 year-old Abdellah, a street child with no family, hanging around Boulevard Mohammed V, begging. He looked desperate and hungry. “Give me a dirham, I am very hungry, I haven’t eaten since yesterday.” This is nothing unusual; there are thousands of street children living on the streets of Casablanca alone. You come across them everyday but your immediate reaction is to look away. You cannot explain your attitude; somehow, they make you feel uncomfortable, and guilty. You hurry away to avoid them. You don’t stop to ask yourself where they sleep, how they manage to keep themselves warm, or when they had their last meal.

Childhood should be the best period of one’s life. However, it’s not always the case for some kids. These children are often from divorced parents. They have suffered from extreme poverty and have experienced domestic violence and abuse. They feel abandoned and have lost all trust in adults. Moreover, they are seen merely as a nuisance or a menace, probably thieves and criminals. The general public’s treatment of them is rude and indifferent; their mistrust deepens.

According to “Bayti” (“My Home”), a Moroccan NGO specialized in helping children in difficult situations, the age of these street children ranges from 7 to 18.

There are multiple, interrelated factors that lead children to be on the streets. Some are direct such as domestic violence and abuse. However, most of the others are indirect and these include poverty and urbanization.

The harsh reality is that if you are poor and jobless in the city, you are nothing. The combination of being young, poor and unemployed leads to another cycle of violence and abuse to which can be added the further evil of exploitation. It is little wonder that children in such circumstances choose the street life as a refuge. There they have one thing: a freedom of sorts.

At the end of the day, some, like Abdellah, do go home, but others sleep on the streets or at railway stations. At night, around the port of Casablanca, groups of young boys sleep on cartons or in doorways.

Drugs and alcohol abuse is a serious problem. The younger children mostly sniff glue (“Silisioun” in Moroccan dialect), but the teenagers drink alcohol and smoke “kif”. Sniffing solvents from a tissue causes hallucinations and offers temporary relief from hunger, sadness and loneliness. These children have a constant need to escape from extreme poverty and hunger, and doing it through drugs leads some to insanity by the time they are in their early 20′s.

Rachid, a 13 year old boy joined Abdellah in conversation: “I take drugs to forget about my situation and to prevent myself from committing a crime. I’ve been caught by the police many times for hanging around here. My mom is a dirty prostitute. So, I escaped from home not to see men coming and going out of the house”.

Rachid took us to a place next to the Casablanca port, where there were too many street children. Some of them were begging, others selling plastic bags or working as shoe-shine boys, while others are simply sitting in the recesses of the buildings and sniffing glue.

For most of these children, the future is dark and unpromising. All that matters to them is day-to-day survival, something to eat, something to wear, and somewhere to sleep. There is no space or time for childhood. Every one of them has a different story. We had to give them money before they would even start listening to us. It was difficult to gain their trust; they lie automatically, and told us 4 or 5 stories before beginning to tell the truth.

Driss, another young 12 year old shoe-shine boy near the Casablanca port railway station, said that his mother married another man after her second divorce. His step-father used to beat him a lot, made him drop out of school, and forced him to work in order to bring him money. Desperate, Driss decided to escape from home: “I prefer working for myself than bringing him money.” My dream was to finish my studies and become a doctor,” he added with a miserable face.

Touhami Zitouni, 14, came from a very poor background with a family living in one of the shanty towns in Casablanca. He does informal jobs just to ensure his daily survival.

Touhami told Morocco World News that he was before in a charity house and its administration had been treating them badly.

“We have no value. These officials are stealing Orphans’ money and let us live in this piggy life, we have no place to go except for the street,” he said.

Touhami added hopelessly: “had el maseoulin taysâw bina” (these officials were exploiting us for years to get money from the state and donors).

Abdel Haq Ramzi said he had tried to immigrate illegally to Europe more than 30 times, risking his life.

Ramzi told us about his adventure with migration, about his friends who had died either in the sea or in the Charity Home from disease or from hunger.

Everyday, many of them attempt to reach Spain from Morocco’s coasts, aboard makeshift boats. While some manage to achieve their dream in their “Alice au pays des merveilles,” dozens are intercepted on their way or arrested on the Spanish territory before being expelled.

Many Moroccans like Touhami and Abdel Haq want to cross the strait of Gibraltar to reach the land of promises and possibilities. They are resorting to the highly dangerous and inhuman alternative of clandestine migration, giving up their rights in exchange for a new, clandestine life.

Most of them have an idealized picture of life abroad. They are strongly influenced by images conveyed by the media about a Europe where everything is possible, and by a set of stereotype stories told by people who have returned back home from host countries – often claiming to be living very comfortably.

Their ignorance is certainly and skillfully used by expanding networks of smugglers for their own, considerable enrichment. These smugglers are encouraging immigration as they propose a “ready-made” new life, “proper” papers and promises of employment which, in most cases, mean undeclared work or prostitution. They go clandestine, stowing away on ships or lorries, or paying large sums to make the crossing in small boats called ‘pateras‘.

Touhami and Abdel Haq can’t afford to pay sums to smugglers. So they use their modest means to immigrate, usually using vans’ tires as makeshift boats. However, they have never managed to reach their dreams.

Abdel Haq said he doesn’t understand how each time he came back alive. May be he was lucky to come across fishermen who brought him back to land.

In turn, Touhami said he would try again and again until he would manage to reach the other side of the Atlantic. For him dying is no longer important, since his dreams were already killed in the street.

Each one of these children imagines how normal childhood could be. Their dreams are shattered by the harsh reality of their lives. We heard dozens of stories from other children. That reminded us of Nabil Ayouch’s movie “Ali Zaoua”. The film tells the story of four street boys who have decided to go it alone without their families. This moving film graphically portrays the terrible and harsh reality of abandoned children and makes us painfully aware that there are thousands of Ali Zaouas in our country.

Whatever the reasons how and why they come to be in the street, once they are there, these children need help and protection to prevent them from further abuse, crime and the increasing risk of HIV, now a serious problem among street kids. Street culture often encourages and reinforces risky behaviors. Street children reported that being forced to have sexual intercourse was one of the greatest problems they were facing in living on the streets. Many street children seek out the physical protection of an older boy for survival, but that kind of partnership can be dangerous. Commercial sex work had become increasingly common among children aged 14 to 16, putting them at risk of contracting HIV/AIDS.

There are various programs designed to address the street children phenomenon in Morocco. Most of these programs have been set up and are run by voluntary and non-governmental organizations such as “Darna” in Tangier and “Bayti” in Casablanca (both express the notion of “My Home,” a shelter for abandoned children). Most of these organizations focus on remedial activities, such as the provision of crisis centers, education, job training, health care, and counseling. However, the ultimate goal is to reintegrate the children with their families wherever possible. Bayti, for example, targets children in difficult circumstances: street children, working children, abandoned children, juvenile delinquent and sexually exploited children. A multidisciplinary team including educators, social workers, doctors, psychologists, teachers, artists, and students collaborates with the organization.

In addition to the work being done by NGOs, the Moroccan government provided care centers for street children in different parts of Morocco and encouraged associations working in the field to increase their efforts to assist children in difficult situations. International organizations such as UNICEF and International Labor Organization (ILO) are constantly involved in preventive activities. They provide information and data as well as offering educational and vocational training.

However, in spite of all the efforts and programs aimed at addressing the phenomenon of street children, their needs are not fully met and their numbers are steadily increasing. The problems encountered with these programs in Morocco do not stem from a lack of initiative, but rather a lack of sufficient resources, including funding and trained staff. There is also a lack of good planning, a lack of organization and no clear government policies. Experts in the field said that no program can succeed unless it is based on a scientific assessment of the situation of the children, and unless consideration is given to their basic needs. Therefore, the government should form more professional teams to carry out research into the subject, and provide more financial support for the NGOs working in this field. NGO’s, on the other hand, should also increase awareness through publicity campaigns. People need to be made aware of the severe consequences of the phenomenon of street children in our society, and all Moroccan families should be made conscious of the danger of neglecting or abandoning their children.