The winds of the Arab Spring swept through the Middle East and North Africa. Citizens, especially youth, took to the streets calling for the collapse of dictatorship regimes, and demanding more social justice, political and economic reforms, preservation of civil liberties, more inclusion in decision-making processes and more transparent and democratic institutions responding efficiently to citizens needs, especially youth.

Parallel to that, Europe has witnessed the birth of movements such as the ‘Indignados’ as a result of somewhat similar factors in the Arab World, such as corruption, lack of job opportunities, the economic crisis and increased instability and lack of participatory democracy and  space for active citizenship.

Despite the obvious differences between the Arab and European regions, it is clear that both are affected by consequences of globalization processes.

The events in a number of countries in the Arab region since the beginning of 2011 have imposed a new perception of young people’s capacities and aspirations. It has contributed to the emergence of a new culture of political activism in which youth are not only part of the political scene, but leading it.

The Arab spring brought down autocrats (in Tunisia and Egypt), led to the adoption of new constitutions (such as in Morocco) and to political transitions towards more democratic elections in a number of countries.

As far as youth and civil society rights are concerned, the Arab spring played a key role in adopting legislations that would guarantee youth rights and CSO’s participation, as is the case of Morocco. The new Moroccan constitution institutionalizes youth participation and allowed for the creation of the Consultative Council of youth and community work; reinforced the freedom of the creation of association and introduced the principle of democratic participation allowing civil society to be an integral part in state consultations from pre-planning to the evaluation of public policies. The constitution allows citizens to participate in drafting legislations, presenting petitions.

In reactions to these changes in both sides of the Euro-Mediterranean countries, the European Union, the Council of Europe and the League of Arab States, who started their Euro-Arab cooperation in 2005, hold several Euro-Arab coordination dialogue meetings to listen to youth-led organizations and key stakeholders in the field of policy-making with the aim of evaluating the emerging needs and demands expressed by youth in both sides of the Mediterranean and rethinking how to move this cooperation forward through concrete proposals.

This cooperation which activated and supported more dialogue between European and Arab decision-makers and youth and CSOs leaders, have been reinforced during the Euro-Arab Young Leaders conference, which took place in Rome from 7 to 11 May 2012.

The conference, which witnessed the participation of over 40 young leaders and key stakeholders from Europe and the Middle East and North Africa regions, was organized by the European Youth Forum, the Italian Youth Forum with the support of the League of Arab States and the World Bank’s Center of Mediterranean Integration in Marseille. Conference participants have identified major obstacles to youth participation. These included but not limited to security harassment and control of youth movements, lack of individual and institutional capacity building, and limited rights (such as access to education, information, services, political participation…)

Participants also noted the lack of experience-sharing that would make young people act effectively in their communities, with stakeholders, as well as with regional and international youth platforms.

The Rome conference was the first of its kind that brought together youth organizations’ leaders and a number of key stakeholders to brainstorm together how to practically improve and sustain the Euro-Arab cooperation, beyond declarations and recommendations.

Mantas Jurgutis, board member of Lithuania Youth Council said that “the Euro-Arab Youth Leaders Meeting in Rome opened a new page in this important cooperation. After all assessment of the past and current changes in the environment, this new page is based on concrete actions and responsible institutions. It is clear that most of the action steps fit to the institutions objectives, so now the only thing to do is to translate promises into actions. Let’s go forward and make it happen.”

On the other hand, Rasha Fityan, youth expert from Palestine, said that “Euro Arab cooperation must lead to governmental agreements for the inclusion of youth organizations in developing and formulating public policies. Youth organizations should today be regarded as a development partner, rather than just a target of institutional programs.”

Rasha, who attended several Euro-Arab dialogue meetings since 2007, expressed concerns about the dependency on foreign aid and serving conflicting agendas.

“Although foreign funding is vital for the survival of a large number of CSOs, there is a general awareness of the associated risks and the possible negative effects of dependency on external funding. We don’t want to become a “project business”, whereby we have to adapt to the requirements of a funder’s calls for proposals instead of focusing on own domestic agendas,” added Fityan

The institutional meeting, part of the Rome conference, which took place at the Italian Ministry of foreign affairs, emphasized the need to have a better coordination among international donors and governmental agencies while working with or funding civil society work to avoid the duplication of activities or the adoption of different strategies that are not always compatible. Most public and international funding is received on a project basis, which has several consequences mainly on the sustainability of actions undertaken under this particular project.

Participants in the Rome conference recommended supporting the continuation and further development of regular cooperation and dialogue through an online platform, physical meetings and annual conferences. They also recommended among others, to create a multilingual e-learning platform that would contain a database of Euro-Arab youth CSO’s mapping and opportunities for the further development of sustainable youth organizations. 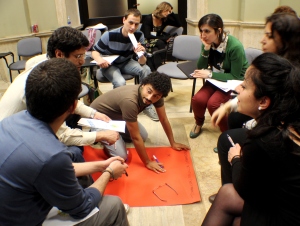 Inspired by the European experience in creating national youth councils, Arab participants highlighted the importance of providing technical assistance to empower Arab youth organizations to advocate for establishing similar councils and platforms in the Arab World, while adopting it to their local and national contexts.

Capacity building was also among the key recommendations. Participants said that the “stakeholders need to revise their capacity-building programs to be able to respond to the new needs emerging in the post-Arab spring. These, according to participants include inter alia, leadership, organizational and institutional structures, outreach and advocacy for youth inclusion and participation in developing and evaluating youth public policies.

“Overall I share a lot of the enthusiasm I’ve seen so far for the future of our regions; politically, financially and culturally we are intertwined and through a shared vision for our future cooperation together, I think there is a lot of potential for great work. Equally though, we shouldn’t expect too much too soon, we all have big challenges to face that don’t necessarily link into Euro-Arab relations, and we shouldn’t be nervous of prioritizing our work if we need to,” concluded Matt Paiton from a British boys scout organization.

Karima Rhanem is a Moroccan Communications and social media specialist, researcher on governance and public policy, former journalist and a social activist with over 10 years of experience in civil society & youth issues. She is currently president of the Moroccan Association for development and Parallel Diplomacy. Ms Rhanem holds a BA in communications and Leadership studies, and preparing an MA in Governance and Public policies at Mohammed V University, Rabat.