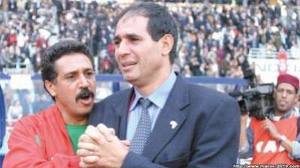 February 14 of each year is a special day in the world. It is the World Love Day, widely known as St Valentine. It is the day when men and women receive cards and gifts as a sign of passion and love.

Feb. 14, 2004 was different in Morocco. It is the first time ever Moroccans inside and outside the country gathered in huge crowds to express their love and admiration, a love of a different kind. It is their passion for football.

That day, Morocco was defeated by Tunisia (2-1) in the first exclusively Maghreban derby at the African Nations’ Cup held in Tunisia between January 24 and February 14, 2004. Instead of feeling depressed for not winning the cup, all Moroccans went out in massive crowds in the main streets whistling and screaming with joy “we lost the cup, but we won a young prosperous team and a great coach”.

To all Moroccans, this wasn’t a defeat. They agreed that the team’s qualification to the CAN 2004 finals was itself a source of pride for all Moroccans and a reincarnation of Moroccan football after their 1976 victory, when they won the CAN Cup Championship. Analysts said that this year the Moroccan team played its best final. Their rival Tunisia has reached the final three times.

It is true that Morocco team lost the African Nations’ Cup, but won the hearts and support of all Moroccans. Cars hooted in the main streets of the Kingdom; a feeling of dedication, joy, patriotism, and a sense of belonging was seen in the happy faces of men, women, and children, who were holding Moroccan flags.

The whole country became red and green (the colors of the Moroccan flag which symbolizes Love and Peace). Upon their arrival, the following day at the Massira Airport in Agadir, the team was warmly welcomed by the local authorities and driven through the streets of the city in a bus, especially decorated for them with flowers, national flags, photos of the team, and pictures of the King. Thousands of fans had gathered together since the morning to greet them and say “thank you, you brought us pride, joy, and honor”.

King Mohammed VI paid tribute to the players and decorated them with the “Mokafaa Wataniya” officer rank distinction. The other team members were granted the “Al Arch Wissam” of the knight order. The Sovereign, who was accompanied by Crown Prince Moulay El Hassan, posed for a picture with the entire team, and hosted a reception in their honor.

The team went afterwards to Rabat where they were received by government members and a huge crowd of fans who were there to express their joy and thanks for the beautiful moments they had offered to Moroccans.

The team had another meeting with their fans in Casablanca in Mohammed V Stadium, where a friendly derby between Wydad and Raja was played in their honor.

Yet, since then, Moroccans hearts were broken: a disappointment after another, being out of the game in first rounds of African Cup of Nations (CAN) 2006 and 2008, a disqualification from the World Cup and the CAN 2010, a disgraceful elimination from the first round of the CAN 2012. The poor performance of the Atlas Lions caused public outcry among the Moroccan public of the high salary paid to Eric Gerets, current coach of the national team. This led to setting up of a parliamentary commission to discuss sports governance for the first time in parliament.

Now the question that comes to mind is when will Moroccans live the same moments they lived in 2004? As things stand, it seems that the arrows of cupidon went into a different direction.